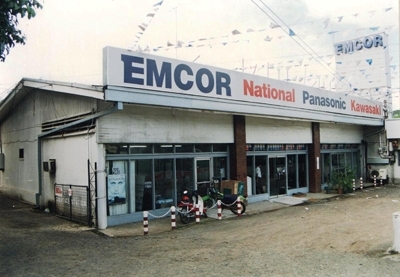 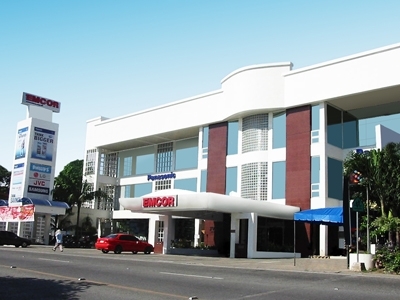 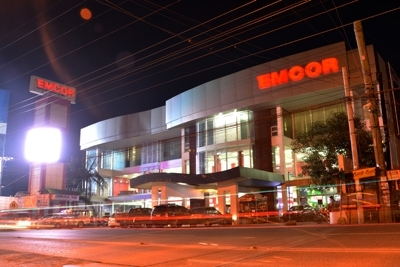 Jesus V. Del Rosario (JVR) founded Emcor in 1958, originally under the name Engineering and Machinery Corporation, as the franchise dealer of International Harvester (IH), mainly serving the logging industry in Mindanao, with its base in Davao City.

In 1976, when the logging business was experiencing a continual downturn, EMCOR shifted its operation to the retail trading and financing of Kawasaki motorcycles, starting at the Bajada, Davao City Store. Later in 1979, the National brand of home appliances was added to motorcycle. The Kawasaki motorcycles were assembled by Delsa Industrial Corporation while the National home appliances were manufactured by Precision Electronics Corporation. These two joint venture companies were formed by JVR years before with Kawasaki Heavy Industries and Matsushita Electric Industrial of Japan. In spite of the change in product lines, the acronym EMCOR was retained, to take advantage of the popularity and goodwill that the name had generated over the years, during the “IH” days.

As qualified manpower and resources permitted, additional stores were opened in major cities and towns beginning in Mindanao and later in the Visayas. By the end of the year 1990, there were 11 stores in Mindanao and 5 stores in Visayas. Furniture was also added to the product lines mainly in larger stores. This was followed by landmark decision to abandon the “specialty shop” concept of selling only the Kawasaki and National brand. The multi-brand model was soon vigorously pursued, starting with motorcycles to include all popular Japanese brands like Suzuki, Yamaha and Honda. Shortly thereafter, the appliance business unit included not only other known Japanese brands but Koreans as well like LG and Samsung.

In 1992, the Parts and Service Department was organized to support the needs of an expanding retail operation. At the same time, the Advance Technology System (ATS) department was established to sell and service computers and other so-called emerging products of the future brought about by the Information Technology and the Internet. In order to broaden the product offerings, numerous other brands from accredited suppliers were added in the stores like china-made products electronic goods and some home furniture products from neighboring Asian countries.

In 1999, investment to improve store facilities started. This involved renovating and expanding the floor area of existing stores and buying suitable lots for store construction purposes. Tacurong Store in Sultan Kudarat was the first store built on a company-owned lot outside the Bajada Davao City head office. Presently, there are 37 of such kind of stores in operation. By December 2000, the number of stores rose to 65, 42 in Mindanao and 23 in the Visayas/Palawan.

Alongside with this development, the company thru the JVR Foundation was actively expanding the scope of its CSR programs over the years. Early initiatives included donation to the Family Planning Organization of the Philippines (FPOP) and providing specialized training to public school teachers.

Today, the presence of EMCOR stores is quite visible in many areas across Mindanao, Visayas and Palawan. With 154 stores and a workforce of 2,000 it has become a very strong player in the retail industry of motorcycles, home appliances, furniture, computers and IT products. It has adopted the tagline “Bringing Comfort to You and Your Home” as its value proposition in all marketing communications.

Providing service excellence to its customers is central to the fulfillment of its corporate mission. EMCOR is currently included in Business World listing of the top 500 corporations in the Philippines and is among the largest taxpayer in Davao City. The company continues to explore opportunities for growth thru the opening of more stores in potential areas and adding more quality product lines suitable for its growing customer base.

EMCOR is the most relevant, world-class, community-based organization that enables customers to achieve a better life by providing quality products and services through personalized care.
We recognize our responsibilities to our country, which is still under developed. We must devote ourselves to the further development of the Philippines by providing our customers and the community we serve with quality products and services through our nationwide store network and by creating more job opportunities.

To attain this objective, we dedicate ourselves to progress, to personal growth and development, and to become a model company.

This is our main objective, our main purpose is not only of financial gains nor to impress others of our achievement. Our mission shall be to create job opportunities for a better standard of living and peace of mind. This shall be the spirit of our daily creed.

We shall work together in harmony with the spirit of cooperation. We shall be fair and just to all for without maturity and understanding we shall exist in the future confused and without direction.

Alone we are weak, together we are strong. We shall work together as a family in mutual trust and confidence. We must be human to understand the problems of others. The more skilled and capable shall guide the apprentice so that through this unity and understanding, we cannot fail.

It will be our policy not to dominate the individual but rather to encourage trust and self-confidence. And he must feel that through his own efforts, he has gained self-respect and satisfaction. Through this policy, the individual will feel his contribution to the true spirit of our daily creed and to the
foundation of our main objective.

If we are to be respected, we must respect the rights and ways of others. Also, be cordial and modest. Let us praise and encourage freely, and in every opportunity, give comfort and understanding.

The development of the Philippines must be within the international standards of progress. But progress cannot be achieved unless we maintain flexibility to adapt with the times and to the ever-changing conditions prevailing around

DAILY CREED ON SELF RESPECT

First, we must be proud of our own self-respect and thankful for the freedom to enjoy our friendship with our fellowmen. Second, we are thankful that through this peaceful association, we can gain knowledge, dedication and self-satisfaction. Third, that through the spirit of self-respect, we shall overcome all difficulties.

To consistently improve the way we do business to surpass customers’ expectations, we shall:

Commit to the fulfillment of our mission and aim for continual improvement in the quality of our products, services and internal processes.
Apply the necessary knowledge, skills and resources essential to the execution of our operational goals and strategic objectives;

To attain this objective, we dedicate ourselves to progress, to personal growth and development, and to become a model company.

Respond to the changes in the market conditions through relevant research and development;
Exceed both customer needs and standards in the industries in which we operate;
Serve in the best interest of the community, the employees, and our stockholders and comply with legal and other applicable regulatory requirements.

Shopping cart
There are no products in the cart!
Continue shopping