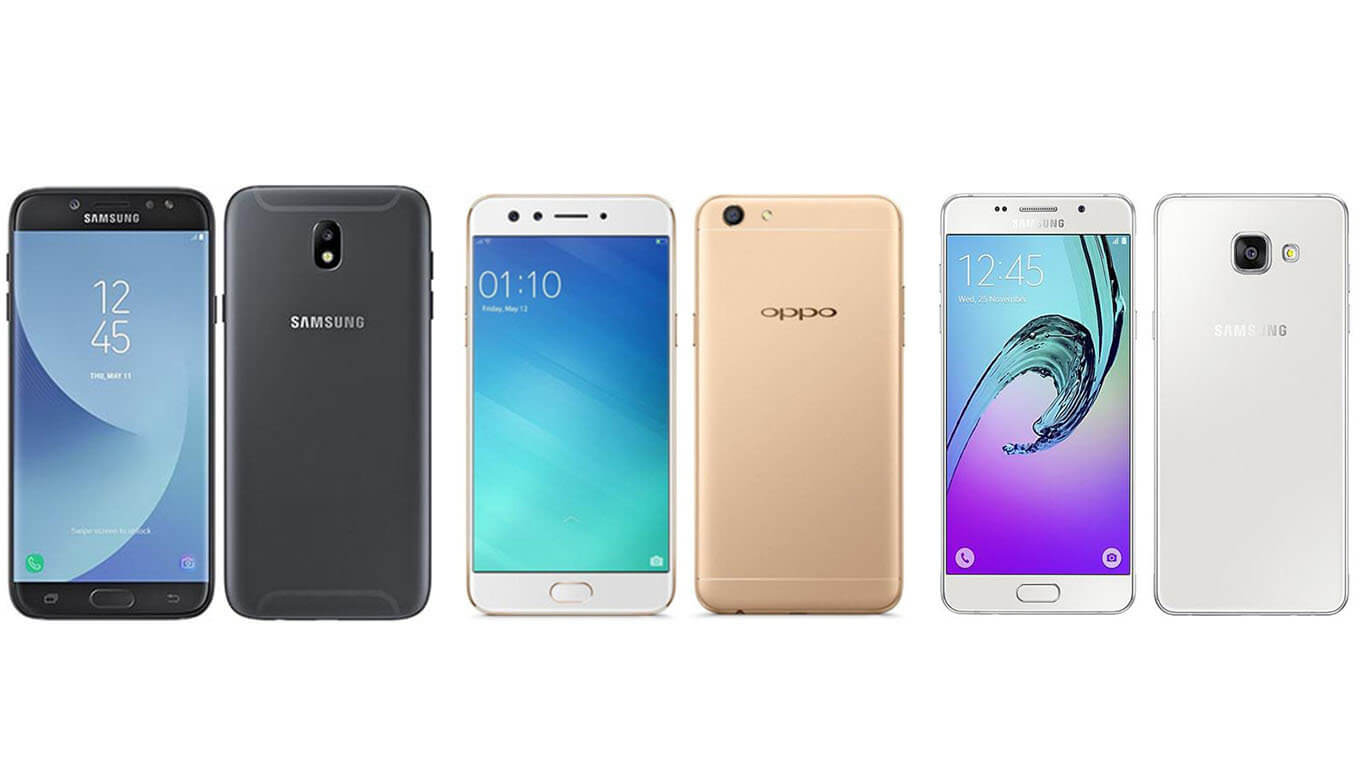 Samsung recently released the Galaxy J7 Pro as part of its line of mid-range phones. The J series in particular is known to have phones that are truly worth your money. With a price of P16,476.00, this places it around the price range of phones like the Oppo F3 and Samsung’s own Galaxy A5 2016.

If these three phones are within your budget and you’re looking for an upgrade, we’re going to compare their features to help find the right smartphone for you.

Battery Life
Samsung Galaxy J7 Pro boasts a 3600mAh battery that can last a whole day even for the heaviest users. The battery is built-in and the phone is equipped with features to help in preserving battery life and shutdown battery vampires. However, the phone does not offer a fast charging feature.

On the other hand, the Oppo F3 is equipped with a non-removable 3200mAh battery. Compared to its bigger sibling the Oppo F3 Plus which had a 4000mAh battery, this is way lower. However, the battery holds up for a long time and doesn’t overheat under stress. Like the Galaxy J7 Pro, the phone takes hours for a full charge.

Among the three, the Samsung Galaxy A5 2016 holds the lowest battery capacity with just 2900mAh. However, it’s also the only one with fast-charging capacity. Like the Galaxy J7 Pro, it’s equipped with Samsung’s Smart Manager that helps optimize your apps.

Camera
A phone’s camera is also one of the major selling points for those looking for a new phone. As most people engage in smartphone photography for social media, sometimes it’s the only thing some consumers look for in a phone.

The Galaxy J7 Pro highlights its 13MP rear camera and 13MP front camera, with apertures that allow quality photos even at night on in dim lighting. With these features, you can get clear, sharp photos even in low light. The camera is also capable of recording with FHD resolution at 30fps.

Of all three, the Oppo F3 seems to be the most impressive in this aspect and could truly claim the title of a Selfie Camera. Similar to the Galaxy J7 Pro, it has a 13MP rear camera but its front camera has a staggering 16MP front camera. However, it lacks when it comes to settings.

The Galaxy A5 2016 also comes with a 13MP camera but has a relatively weaker 5MP front camera. However, the A5 2016 delivers when it comes to color reproduction and shooting in 1080p.

Performance
Packed with an Exynos 7870 Octa Core Processor with 1.6Hz processing speed and 3GB RAM, the Galaxy J7 Pro is very impressive when it comes to performance. The phone comes with 24.4MB of usable memory and supports up to 256GB external memory support through MicroSD. The Android phone comes with Nougat 7.0.

Oppo F3, on the other hand, is equipped with Colors 3.0 with is based on Android 6.0. It also has an impressive 4GB RAM and 64GB in storage. However, it is only expandable up to 128GB. However, its Mediatek processors and its GPU, it has pretty limited resources to work with.

Finally, the Samsung Galaxy A5 2016 is equipped with an Octa Core Cortex-A53 processor with 2GB of RAM. Given this price, one might consider the device too expensive for the chipset and GPU it is equipped with. The device was originally released with Android 5.1.1 Lollipop but can be updated to Nougat.

Overall Look and Feel
You wouldn’t really buy a phone you don’t want to see it with. Each of the phones mentioned comes in a variety of colors. The Samsung Galaxy J7 Pro comes in black, gold, and silver blue. Meanwhile, the Oppo F3 is available in Gold and Rose Gold. The Galaxy A5 2016 also comes in black, rose gold, gold, and white.

There’s also a difference in screen sizes. The Samsung Galaxy J7 Pro comes with a comfortable 5.5” screen, same with the Oppo F3, while the Galaxy A5 2016 has a 5.2” screen. All three phones are built nice and light, having a full metal body finish that feels good in the hand.

Conclusion
Whichever you choose, each phone has interesting features to offer. Above are just some of the things that most people look at when buying a phone. Visit your trusted cellphone dealer or the nearest Emcor store. We hope you find what you’re looking for!